Despite healthcare reform, which naturally led most reasonable people to believe that 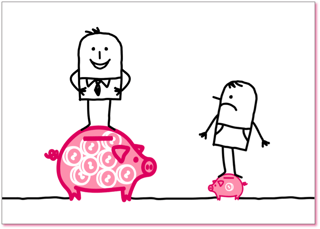 runaway healthcare costs were finally going to be tamped down, the cost of obtaining health insurance is still very much on the rise. In fact, from 2006 to 2015, the average out-of-pocket costs per worker rose almost 230 percent, according to a recent Kaiser Family Foundation report.

No matter if someone is acquiring coverage on a state or federal exchange, or if they are obtaining coverage through an employer-sponsored plan, most everyone is feeling the pain.

In the case of workers who are covered by an employer-sponsored health plan, increases are likely coming on two fronts; higher premiums and higher deductibles.

While health plan premiums paid by employers are rising this year at lower rates than in year’s past, they are still outpacing inflation. No longer able to absorb these constant increases all alone, these growing expenditures are almost always now shared between employer and employee.

Exacerbating things, employers have also been shifting a greater percentage of the premium burden onto employees. Often times, employers cloak this cost-shifting move by blaming it on the Affordable Care Act. This is somewhat disingenuous unless the employer is planning ahead for the Cadillac Tax, despite its likely repeal by Congress and it’s applicability to only those on the richest of plans.

Employers who are looking for other ways to cope with rising healthcare costs (and who isn’t really) are opting to add healthcare plans to the mix that come with considerably higher deductibles. For some employers, these higher deductible plans are now the only ones they offer. These plans put workers on the hook for even more of the healthcare cost burden, most especially those who are frequent users of the plan. The Kaiser Family Foundation report referenced earlier suggests that 46 percent of employees now have annual deductibles of over $1,000, and many have deductibles 2x to 3x this amount.

These plans are commonly referred to as HDHPs, or High Deductible Health Plans. HDHPs are part of a movement in “consumer-driven healthcare” which posits that consumer will become more actively engaged in health care decisions if it’s their money on the line.

While such plans are becoming wildly popular, employers may not realize the dangers of shifting too much of the cost of healthcare benefits to their employees.  By their very design, HDHPs are intended to shine a brighter light on out-of-pocket expenditures. And therein lies one of the perceptual problems.

Much like auto insurance, with HDHPs, employees are responsible for all of their healthcare expenditures until the deductible, usually a few thousand dollars, is satisfied. On the flip side, however, premiums for these plans are considerably lower than health plans with much lower deductibles.

Savvy employees who “run the numbers” and work through various scenarios, can many times come out ahead by shifting to an HDHP, though employer education in this regard is somewhat lacking and many employees never fully comprehend why these plans can often times make good sense.

In general, and if designed with a well-funded Health Savings Plan (HSA) to offset these higher deductibles, HDHPs are usually a great fit for healthy individuals who don’t use medical services all that often. They can also make great sense for even heavy users of medical services, providing that the employer (and not just the employee) contributes substantially to the HSA.

An HSA, or Health Savings Plan, is a tax-advantaged savings account whose funds are designed primarily to be spent on healthcare expenses. (Funds can technically be withdrawn for other reasons but are then subject to income taxes and a 20 percent penalty.)  HSAs can only be used in conjunction with HDHPs and are intended to help defray the larger out-of-pocket healthcare costs that come with higher deductibles.

Both employer and individual contributions to HSAs are not taxed as income, and unlike Flexible Spending Accounts (FSAs), HSA funds roll over and accumulate year-to-year if not spent. More importantly, HSAs are owned by the individual, not the employer, and unused funds can accrue for retirement; for persons who have reached the age of 65 or have become disabled at the time of the withdrawal, the 20% penalty is waived. Then, only income tax is paid on the withdrawal and, in effect, the account has grown tax deferred, similar to an IRA.

While HDHPs have been around for a while, they have been proliferating in recent years. In fact this past year, according to data from Towers Watson, 82% of large employers planned to offer an HDHP, up from just 21% of large employers offering one a decade ago. And another study found that 44% percent of employers were expected to offer HDHPs as their only health insurance option.

Health-savings accounts (HSAs) have been growing in prevalence right along with HDHPs, posting an average annual growth rate of about 15% since 2011, according to a survey by America's Health Insurance Plans.

The goal of HDHPs and consumer driven healthcare, in general, is to encourage insured individuals to become more conscious and careful consumers of healthcare. With “skin in the game,” the insured will hopefully be more deliberative about how they use health services. Many proponents argue that the day consumers make a habit of competitive comparison shopping for everything from Rx prescriptions to medical procedures is the day that we’ll lick rising healthcare costs.

In the short term, however, research suggests that these plans are yielding some dangerous and unintended consequences. There is mounting evidence that suggests that in an effort to avoid a large out-of-pocket expense, people are delaying or foregoing care when they really need it, only to later find themselves with more serious illnesses which require more serious care and even hospitalization.

According to a survey by Thomson Reuters, 20 percent of Americans say that they have delayed or postponed medical care, such as a doctor visit. Of those who canceled or deferred care, 24 percent said they did so because of cost concerns. By comparison, the last time that Thomson Reuters asked that survey question in 2006, just 15.9 percent of respondents said that they had postponed medical care.

Regardless of the reason, deferring care could lead to more serious and expensive healthcare conditions in the long term. And that will ultimately result in higher insurance rates for the employer. These deferment risks are compounded for chronic conditions, which may require regular monitoring and earlier intervention from a healthcare practitioner. “Consumers have much more skin in the game, and that may be fine if you’re healthier and don’t use a lot of healthcare,” Drew Altman, CEO of the Kaiser Family Foundation, told The Associated Press. “That could be a real problem if you’re chronically ill.”

Use of Care Is Impacted By Socioeconomic Status

There is evidence to suggest that the use of care among those enrolled in HDHPs is also dependent on socioeconomic status. A study in the journal Health Affairs found that people of high socioeconomic status, enrolled in HDHPs, did in fact cut their use of ER visits for appropriate lower-severity conditions by 15-20% while this group's appropriate use of emergency care for serious conditions did not change.

On the other hand, people of lower socioeconomic status, who were enrolled in HDHPs, reduced their ER use for potentially life-threatening and serious health conditions by 25-30%. Hospitalizations among patients with lower socioeconomic status also declined in the first year of the study, by 23%, but jumped in the second year, suggesting that delayed care led to even more serious illness requiring hospitalization.

Another study, in the journal Medical Care, found similar disparities according to gender, with men enrolled in HDHPs more likely than women with the same health care coverage to put off needed care for serious issues like kidney stones or chest pain, and ultimately to have higher hospitalization rates.

Offsetting the Risks of High-Deductible Plans

By no means is this post meant to dissuade employers from HDHPs, nor is it intended to convince employers that they must shoulder the entire burden of rising health insurance costs.  Rather, it’s meant to draw attention to the perils of shifting too much cost to the employee. And that’s where some sound advice from your insurance broker comes in.

Here are some actionable recommendations to; minimize carrier rate increases, financially motivate employees to make intelligent decisions, and finally, to better educate your workforce on HDHPs and HSAs:


Educate Your Workforce (& Their Dependents):


We Are Here To Help

Balancing the burden of cost for employee benefits between employer and employee is admittedly difficult, and putting in place the right plan design, administration oversight, financial incentives and employee education is labor-intensive. But we are here to help.

If you would like to talk about this or any other employee benefits topic in greater detail, please contact us.