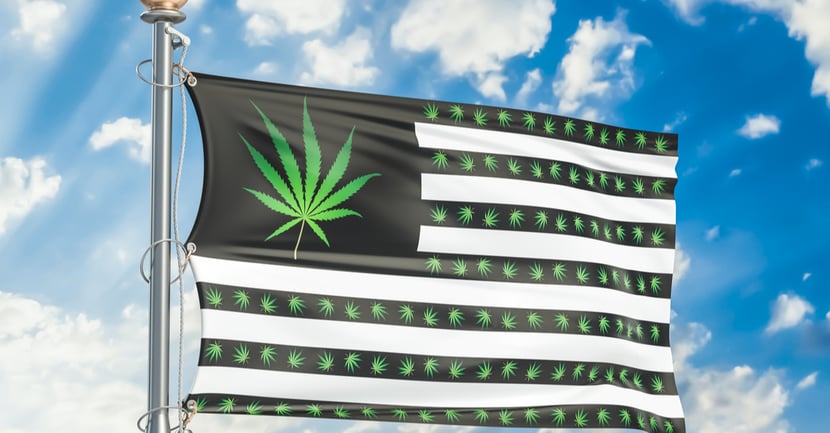 While all marijuana use remains illegal under federal law, the approval of recreational/medical marijuana use at the local level in these states impacts the drug use policies and procedures employers have in place for both applicants and employees. These include how employers can approach testing and disciplinary procedures.

These states are not, of course, the first to legalize marijuana. Eleven other states previously voted in favor of recreational marijuana laws, and 22 have passed medical marijuana legislation. It is therefore helpful to use the experiences of employers in these states as an example to follow.

In this post we will discuss federal and state marijuana legislation, employer and employee rights and responsibilities, specifics about the five states enacting new legislation, and steps employers can take now to be prepared as these new laws roll out.

Since it is oftentimes a point of confusion, let's start with federal law regarding marijuana. From a federal standpoint, the federal Controlled Substances Act (CSA) classifies marijuana as a Schedule I substance, considers it to have a high potential for abuse, and doesn't recognize it as having any accepted medical applications.

Under federal law, all Schedule I substances are illegal under the CSA, and the federal Food, Drug and Cosmetic Act (FDCA) prohibits the use, and dispensing and licensing of substances, such as marijuana, that have not been approved by the federal Food and Drug Administration.

So how can marijuana be illegal at the federal level, but allowed at the state level? Well in practical terms, this simply means that states cannot stand in the way of federal prosecutions of their residents who are using marijuana, but by making such use noncriminal under their own laws, they can effectively eliminate state prosecution of these citizens under state law.

We are reaching a point where a majority of U.S. states have enacted laws that allow certain uses of marijuana or a marijuana derivative. State laws governing marijuana use generally fall into one of the following three categories:

CBD Only: This category includes states that allow limited uses of cannabidiol (CBD). CBD is a derivative of marijuana that has no psychoactive effects in users. Typically, states allow CBD use only for the treatment of one or more specified medical conditions. Employment-related issues rarely arise under these laws.

Medical Only: This category includes states that allow the use of marijuana for medical purposes but do not allow any recreational use. Employment-related disputes arise frequently in medical-only use states.

Under virtually every state law that legalizes marijuana use, employers have an explicit right to prohibit their employees from using or being under the influence of marijuana at work or during work hours. This policy resembles the prohibition of alcohol most employers enforce in their company guidelines.

If an employee is under the influence of marijuana while at work, actions can be taken against the employee due to safety concerns. In addition, most of these laws do not place any restrictions on an employer’s right to administer drug tests, with NYC, DC and Nevada as notable exceptions.

That said, most state laws do not allow for adverse action to be brought against the employee for off-duty marijuana use if it does not negatively affect their work. Employment disputes can, and  often do arise when a state’s marijuana law does not address whether employers may prohibit employees or applicants from engaging in off-duty marijuana use. The inconsistency between federal law and state marijuana laws also leads to questions regarding employers’ obligations.

Most states still allow employers to require drug tests to applicants and employees. Some states, like New York, Nevada and the District of Columbia, as previously mentioned, have different testing laws. It is vital to know your state’s laws regarding specific actions employers can take for a positive drug test result. Understanding these laws can help you avoid coming into conflict with discrimination and/or other employment laws protecting applicants or employees solely due to a positive test result.

Being fully aware of what disciplinary actions are allowed in your state is critical to protecting both your business and your employees. Note that if your employees are driving or operating heavy machinery, there may be additional laws and regulations for you to be aware of and enforce.

Employers in Arizona are somewhat familiar with existing marijuana laws, since medical marijuana has been legal within the state for over a decade. As such, the move from medical to recreational marijuana use is not nearly as complicated as it is for employers in other states who are dealing with this for the first time. The majority of Arizona employers’ existing policies and procedures can be applied to everyone instead of only medical marijuana card carriers.

As an employee benefits broker and employer in Arizona, we want to provide a bit more in-depth overview of what this switch to the legalization of recreational marijuana means for businesses in Arizona. Here are some of the quick details you should be aware of as an employer (and an employee):

The table below provides an overview of Arizona’s Proposition 207, which was approved by nearly 60% of the state’s voters on November 3, 2020. Please note that this change does not supersede or eliminate any existing rights for qualifying patients under the Arizona Medical Marijuana Act (AMMA).

The table below provides an overview of New Jersey’s Public Question Number 1, which was approved by nearly 67% of the state’s voters on November 3, 2020.

The table below provides an overview of Montana’s Ballot Issue I-190, which was approved by nearly 57% of the state’s voters on Nov. 3, 2020.

The table below provides an overview of South Dakota’s Amendment A, which was approved by nearly 54% of the state’s voters on Nov. 3, 2020.

The table below provides an overview of South Dakota's initiated Measure 26, which was approved by nearly 70% of voters on Nov. 3, 2020. 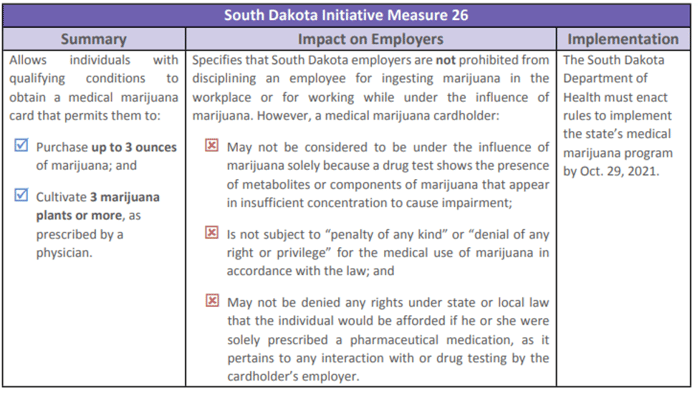 The table below provides an overview of Mississippi’s Initiative 65, which was approved by over 74% of the state’s voters on Nov. 3, 2020. Voters rejected an alternative, more restrictive measure (House Resolution 39) submitted by the state’s legislature.

There are actions employers can take as legal recreational marijuana use rolls-out to ensure they are in compliance with these new regulations and laws.

As with any new law, it is crucial that your organization becomes familiar with the details of the law as it pertains to marijuana usage, including:

Review and Formalize Your Company Guidelines

Perform a thorough review of your company guidelines to ensure that you comply with both federal and state marijuana legislation. It is important to follow federal guidelines over state guidelines if you are a federally-based company.

Multi-state employers may not be able to make a single overarching policy regarding substance use in the workplace and may need to create state-specific guidelines that detail the policy for each state where your employees work.

Brush-up on Disability Law & Marijuana Use

Drawing on the experience of states with longer-running legalized recreational marijuana, employers in some states could face lawsuits and potential liability under state disability laws for adverse actions taken against authorized, off-duty marijuana users.

In states where marijuana law does not explicitly address workplace drug policies and off-duty use, employers should consider either:

(1) accommodating a disabled employee’s state-authorized, off-duty marijuana use or

(2) interactive engagement with the employee to determine whether other reasonable accommodations may be suitable.

Familiarize Yourself With Marijuana Drug Testing

Employers should become familiar with any applicable laws that specifically address workplace drug testing. For example, some states have drug testing-specific laws that require employers to have written policies and certain testing protocols in place before they may even conduct an employee drug test. Similarly, some state workers’ compensation laws prohibit claim denials or adverse employment actions based solely on positive drug tests unless certain requirements are met.

Before the new marijuana use laws come into effect, it is crucial that companies carefully review and update their guidelines and provide a copy to each employee. These guidelines protect both employees and employers as a written policy that determines all testing, rules, and disciplinary actions. Outlining expectations and procedures in advance decreases confusion and conflicts.