How Employee Benefits Work When An Employee Qualifies For Medicare

Around 10,000 baby boomers turn 65 every single day, which means 10,000 more people become eligible for Medicare. If your human resources department hasn’t yet been inundated with questions from your older employees about Medicare eligibility, they will at some point — and soon.

After all, many boomers are choosing to work a bit longer than the standard retirement age of 65 for a variety of reasons — some are still physically able to work, so they’re taking advantage of it, others are trying to save more for retirement (because so many people haven’t saved nearly enough, if anything), and others just aren’t ready to give up their day jobs yet.

It’s possible that some of your employees have deferred Medicare eligibility because they haven’t actually retired yet, but some people who are still employed find it’s cheaper to take the leap into Medicare (and all its parts) than to stay on their employer-sponsored health plan (though many choose to enroll in both). That said, it’s not quite that cut and dry when it comes to those enrolled in health savings accounts (HSAs) through high deductible health plans (HDHPs).

Here are the things that need to be considered when an employee or covered spouse turns 65:

With the exception of those employees actively contributing to an HSA, there’s really no reason for them not to enroll in Part A, which covers hospitalization, home health care, care at nursing homes, and hospice care. As long as employees have worked and paid Medicare taxes during a minimum 10-year period of time (the period of time deemed long enough by the government), Medicare Part A comes premium-free (however, it does come with coinsurance). The situation gets a bit more complicated when employees who are ready to enroll in Medicare are also contributing to an HSA.

People who choose to delay their Part A enrollment often do so because they’re enrolled in an HSA-compatible HDHP. The issue here is that they cannot be enrolled in any other kind of insurance plan if they’re still actively making contributions into an HSA. Enrolling in Medicare Part A while contributing to an HSA would be a violation of the terms set forth by the IRS (though it would not be a violation for Medicare Part A enrollees to spend previously accrued HSA savings on eligible medical expenses).

It’s also worth noting that this IRS rule only applies to the working individual who is contributing to the HSA, meaning that if they are married to someone who has an HSA at their work, that individual is allowed to continue contributing to that savings account and those savings can be used to pay eligible expenses incurred by both individuals.

Because Part A doesn’t provide coverage for regular doctor visits, most working people who decide to enroll in Part A are likely to keep their employer-sponsored health plan so they aren’t paying out-of-pocket for such services (especially if they visit the doctor frequently).

Employees or spouses planning to delay Medicare enrollment, need to keep in mind that premium-free Part A coverage actually starts retroactively by six months. Therefore, the Centers for Medicare and Medicaid Services (CMS) recommends employees stop contributing to their HSAs six months prior to enrolling. If they don’t, they’re likely to incur a 6 percent excise tax on those contributions. They can also elect to have those excess contributions removed from their HSA, in which case they’ll simply pay regular income tax on that money.

Therefore, if an employee is not enrolled in an HDHP, it behooves them to enroll in Part A coverage. When Medicare enrollees are also covered by an employer-sponsored group plan, Medicare coverage is (usually) considered secondary. So if an employee is hospitalized, their group health insurance would receive the claim first and Medicare would pick up whatever was left. Because Part A coverage is free (for most people), this strategy could help save your employees money on out-of-pocket expenses.

Given that Part B coverage isn’t free, employees would essentially be increasing the amount of money they’ll pay in premiums every month if they chose to enroll in both. Unless the employee has a lot of health issues and would like to enroll in additional coverage to cut down on out-of-pocket expenses, there may not be an advantage to enrolling in Part B until retirement, at which time the retiree will be entitled to a special enrollment period of eight months to sign up for Part B without incurring a late penalty (more on penalties later).

However, there are some exceptions. Some small employers (those with fewer than 20 employees) require employees turning 65 enroll in Medicare coverage. The other exception is if the covered individual is in an unmarried domestic partnership and receives health insurance under his or her partner’s employer plan.

In this case, they don’t have the same right to delay enrollment in Part B without penalty, except in two circumstances:

The last piece of Medicare coverage is prescription coverage, or Part D, which is paid through premiums, just like Part B. Even though Part D coverage doesn’t cover anything other than medication, it’s still considered health coverage, so employees actively contributing to HSAs would still lose their HSA tax-advantage savings status if they enroll.

For most people already enrolled in employer-sponsored plans, Medicare Part D isn’t typically worth signing up for until retirement. If the employer offers prescription drug coverage that is considered “creditable” — meaning that Medicare considers it at least of equal value to Part D coverage — they don't need to enroll in a Part D drug plan until they retire.

When their employer coverage ceases upon retirement, they’ll be entitled to a two-month special enrollment period to sign up with a Part D plan without penalty. If the employer’s drug coverage isn’t considered “creditable”, they would need to enroll in Part D during their initial enrollment period at age 65 to avoid late penalties if and when they eventually sign up.

If an employee isn’t eligible for premium-free Part A coverage (meaning that they didn’t work and contribute to Medicare for at least 10 years) and they don’t sign up when they become eligible, they may incur a late penalty of 10 percent and will continue to “pay the higher premium for twice the number of years [they] could have had Part A, but didn't sign up.”

There is a Part B late enrollment penalty of 10 percent for each year a person is eligible for Medicare, but did not apply and this penalty lasts for as long as the person has Part B coverage (regardless of how much time has passed). For example, if you retire at age 65, but don’t enroll in Medicare Part B until age 67, you’ll incur a late penalty of 20 percent (10 percent times the two years you waited) — for the rest of your life.

However, people over the age of 65 who are still working (and have coverage through their employee benefits) are oftentimes exempted from paying the penalty because they have “creditable coverage.”

And of course, there’s a late penalty for not enrolling in Part D coverage as well, but it’s only applicable if the employer’s prescription drug coverage wasn’t considered “creditable”. The penalty is also a bit more complicated; it’s calculated by “multiplying 1% of the ‘national base beneficiary premium’ ($35.02 in 2018) times the number of full, uncovered months [the person] didn't have Part D or creditable coverage. The monthly premium is rounded to the nearest [tenth of a dollar] and added to [the] monthly Part D premium.” But again, this penalty is typically waived for those enrolled in employer-sponsored health coverage.

Medicare can be a tricky transition for employees and other covered individuals in their household who are choosing to work past the age of 65. Each person’s situation will be different, but you should be able to inform your workforce about how your employee benefits work with Medicare so they can make the best possible decision for their families.

If you have any questions about how your employer-sponsored health insurance works with Medicare, be sure to check with your employee benefits broker before advising your employees. We've also assembled, courtesy of the Centers for Medicare & Medicaid, a 16 page user-friendly questionnaire which is designed to help your employees determine their initial enrollment period, decide whether to enroll in Medicare Part A or Part B once they turn 65, and learn how to sign up for Medicare Part A and Part B (or opt out of Part B). You can download the questionnaire here and start using it today. 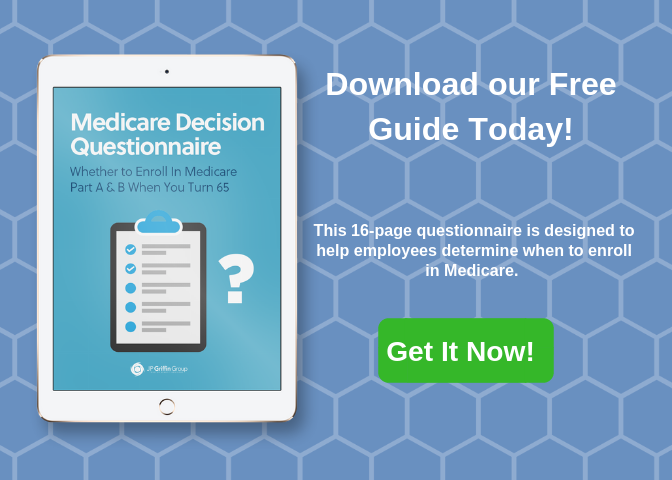