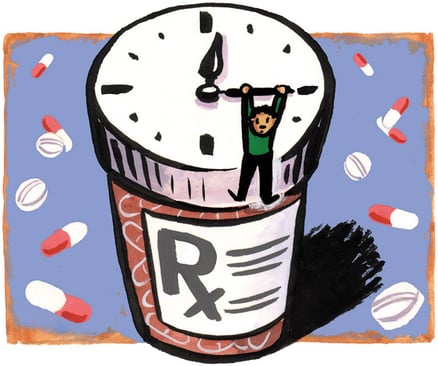 When working on cost containment solutions, many employers completely overlook a critical component that could secretly be costing them tens of thousands of dollars: medication adherence. Medication nonadherence is associated with a higher rate of hospitalization (and at a higher cost) than those compliant with their medication regimen.

It seems simple enough — people are prescribed medications and they take the necessary doses, right? Well no, not necessarily. Medication adherence is a complicated topic with multiple, unrelated causes that are difficult to pinpoint and treat. And unfortunately, this problem doesn’t actually have a simple solution. But nonetheless, it’s important for employers to understand what it is so they know how they can help — and how it affects their budgets.

What Is Medication Adherence?

Simply put, medication adherence is when patients properly follow directions for taking medications as written by a doctor or pharmaceutical company on the label. For example, many over the counter pain medications allow for one or two pills to be taken every four to six hours, but never more than so many in a 24-hour period. Some asthma medications require once daily doses, while others require two (morning and night), and others require four (two in the morning and two at night). In addition, many blood pressure and cholesterol medications are taken once daily.

Some medication requires a change in diet (such as avoiding certain foods, like grapefruit, which can counteract the drug) or have strict instructions on how to take the medicine, like not eating for a certain period of time after consumption. Many times, these food restrictions have to do with a body’s inability to absorb the medication or vitamins if certain foods are present in the patient’s system.

According to the Centers for Disease Control (CDC) there are three different forms of medication nonadherence:

1) The patient does not initiate treatment. In this case, the patient failed to ever fill or pick up the prescription from the pharmacy. There are many reasons that a person could decide to not pick up a medication including convenience, cost, or a simple refusal to consume the medicine.

Unfortunately, these three forms of medication nonadherence must be treated independently — meaning that doctors cannot address each of them in the same way, as there are many different reasons behind them. We’ll discuss how this fact complicates the issue later on.

Why Medication Adherence is Important

The successful treatment of illnesses through the use of prescription medicine is absolutely dependent upon consistent use of the medications as prescribed. In fact, medication adherence is so important that 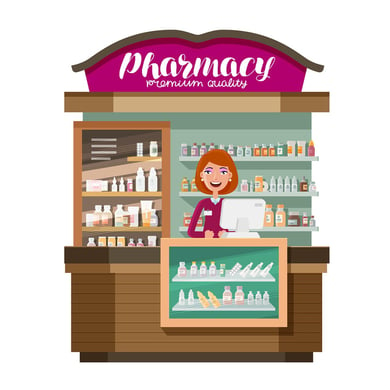 the World Health Organization (WHO) believes increasing the effectiveness of adherence interventions may be more impactful on the health of a given population than an improvement made in specific medical treatments. Medication adherence is a substantial problem, causing an estimated 125,000 deaths each year.

The CDC, National Institutes of Health (NIH), and the WHO all agree that individuals who do not adhere to prescribed courses of both medical treatment and prescribed medication are at greater risk for negative outcomes, which is likely to lead to higher healthcare costs. These costs are often incurred through hospitalization, re-hospitalization, and premature death.

One could assume that medication adherence means taking medications as prescribed 100 percent of the time, but fortunately, medical professionals understand that humans are fallible — that missed doses are simply going to happen. According to the New England Journal of Medicine, doctors give patients a small reprieve: an individual who adheres to prescription treatment more than 80 percent of the time is deemed to be compliant by medical professionals.

Studies consistently show that 20 to 30 percent of prescriptions are never filled, and that approximately 50 percent of medications filled for chronic disease are not taken as prescribed. The CDC reports that an estimated 50 percent of patients are nonadherent at any given time.

Frequently missed doses or partial doses of medication result in an amount of a drug in the bloodstream that is not adequate enough to treat the disease. Fast-forward to when the patient (who is not taking medication as intended) goes back to the doctor for a follow-up. Without the knowledge that the patient is not adherent to his medication regimen, it would appear to the doctor that the disease is not adequately controlled. This then prompts the physician to increase the dose to more aggressively treat the condition.

This dosage alteration may be unnecessary and can predispose the person to having side effects or even an additional medical condition, such as an increased risk of very low blood sugars if diabetic or episodes of loss of consciousness or feeling light-headed if treating high blood pressure. More medication is not always “better,” as all outcomes in this case are detrimental. In the long-term, the chronic disease is not well controlled and may even result in progression of the disease, rather than management.

For example, a person who has diabetes and does not consistently take their prescribed medications are far more likely to be hospitalized than those who followed their prescribed treatment regimens more than 80 percent of the time.

Medication nonadherence leads to a 17 percent higher rate of hospitalization with an average cost of about $3,575 greater than that of a medication adherent patient. Researchers have estimated that “total hospitalization costs could have been reduced by more than $25 million if nonadherent patients had been compliant with their treatment regimens.”

The Difficulty with Medication Adherence

Medication adherence is a complex problem that the CDC, NIH, and the WHO say varies in gender, age, health illiteracy, barriers to medical care, poor provider relationship, number of prescriptions a person is on (referred to as polypharmacy), cultural beliefs, negative medication side effects, lack of social support, memory loss, and financial stressors.

Inadequate health literacy is a significant problem in the U.S. and contributes to the medication adherence issue. The economic consequences of low health literacy skills are exemplified in a 1992 study conducted by the University of Arizona that looked at patients enrolled in Medicare. The study showed 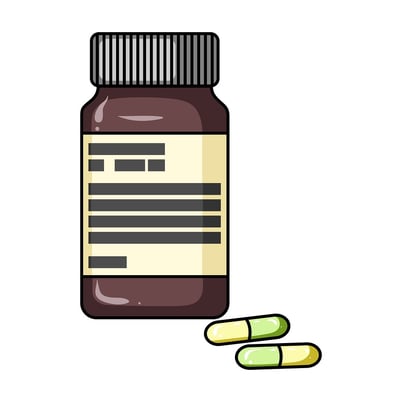 It’s important to realize that sometimes, medication adherence issues directly correlate to a person’s desire to not think or be reminded of their disease or condition. In addition, it may not be surprising to find out that medication non-adherence is highest in individuals who are symptom-free. This matter falls to the field of behavioral science (such as psychology), which may play more of a role in reaching this subset of individuals.

We live in an era when effective medications now exist for many diseases and new drugs are being developed rapidly for illnesses without current effective treatment. Therefore, many physicians find it disheartening that half of all individuals who are prescribed medications fail to receive the full benefits of the drug due to non-adherence to the recommended treatment.

When trying to encourage medication adherence it needs to be understood that there is significant diversity in populations affected by non-adherence and that what works with one group of people may not work for another. The keys are patience and education.

Medication non-adherence is a major problem in the U.S. and results in a little over $290 billion dollars spent each year, which is roughly 13 percent of all healthcare spending. This is a particularly poignant problem for businesses that are self-insured, as medication non-adherence creates an unnecessary and avoidable financial burden.

In order to encourage employees toward medication adherence, some employers are now looking to reduce or eliminate copayments for those with a chronic disease. Typically, this means prescriptions for high blood pressure, high cholesterol, and diabetic medications.

The key to this strategy is that employers can look at the top cost driving ailments within an employee population and then tailor the solution to fit the problem. This is often times referred to as "value-based insurance design". For example, if mental health is an issue within an employee population, a mental health prescription plan could be negotiated with the insurance carrier (specifically, at the time of contractual agreement). Employees who benefit from waived or reduced copayments are more likely to fill their prescriptions and be adherent to long-term treatment.

To prevent “forgetfulness” from being a reason for lack of medication adherence, some companies are developing tools to remind people to take their medications. Examples include sending reminder text messages and pill organizers with built-in alarms that are triggered when a person doesn’t take his medication.

Specifically, the Center for Connected Health is working on a pill bottle topped with a special cap that uses light and sound to signal the patient if they’ve forgotten medication. The cap has an embedded wireless connection that can send automated calls to patients to remind them to take medication and can even go a few steps further by compiling progress reports and sending refill reminders.

In addition, the caps can share medication adherence data with doctors and other close friends or relatives if the patient chooses to do so. The study observing the effectiveness of these devices suggests that adherence could be increased by up to 27 percent with use of the caps.

Research shows time and time again that medication adherence can save both money and lives, which is certainly something employers and employees alike are interested in. While HIPAA laws prevent 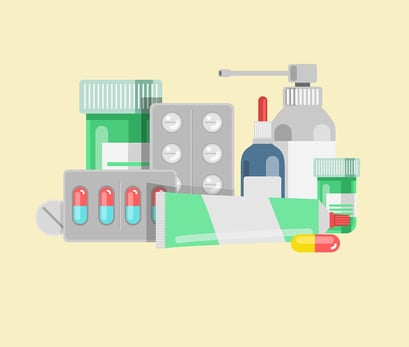 employers from knowing exactly what medications their employees are taking, there’s nothing wrong with educating workers about the importance of adhering to their prescribed medication regimen.

In addition, employee benefits brokers (like the JP Griffin Group), who’ve wisely invested in population health analytics tools, should be able to overlay claims data with biometric data to isolate groups of individuals who are nonadherent. These individuals can then be brought to the attention of the medical carrier who should be able to put a HIPAA compliant outreach program together to address this audience one-on-one, thereby preventing a certain percentage of high cost claims from ever hitting the plan.

For employers who lack the ability to identify these nonadherent cohorts, they can still attempt to address the issue globally by posting informational sheets in the break room accompanied by educational seminars during work hours and company-wide emails to recap the information for those who missed the meeting. This is also an area in which an employee benefits broker could assist, perhaps providing customized informational sheets to help a population understand how medication adherence affects them.

Employees may not realize how crucial it can be to strictly adhere to medication regimens, nor how being non-adherent could affect their entire course of care. They may not even realize that they aren’t adhering to their regimen, especially when it comes to restrictions around their medications, such as abstaining from grapefruit or alcohol (as with many cholesterol medications).

Chances are, very few people actually read the sheets that come with medications at the pharmacy, but encouraging employees to do so can help them catch any special instructions surrounding the medication. Most employees do not assume their HR director is a healthcare expert, but nevertheless, that’s where they go when they have questions regarding their health insurance. While they may not have the answers, they should be prepared with resources to give to inquisitive employees.

Do you have questions about how to help your employees with medication adherence? Leave us a comment below or contact us. We’re happy to help!