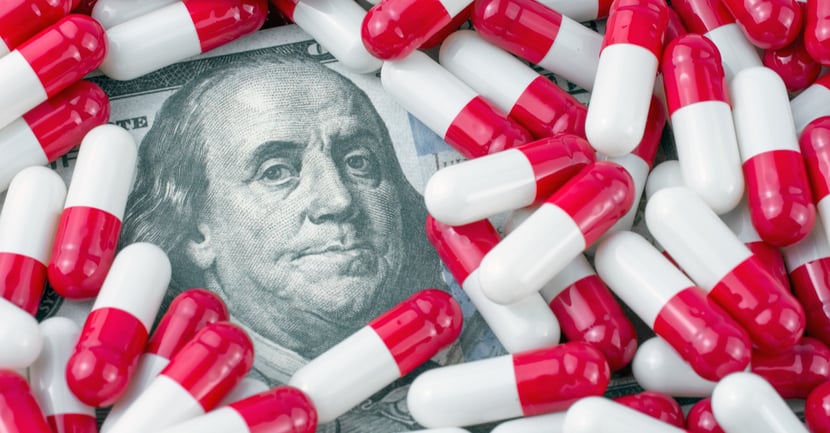 As prescription drug costs continue to increase, it’s important for employers to understand the trends behind the rise and what they can do to better manage their health care expenses.

This blog post sets out to provide context for why prescription prices continue to rise and offers cost-cutting solutions for employers and employees.

In 2019, the United States spent nearly $370 billion on prescription drugs, keeping trend with significant increases year over year. Although prescription drug spending has historically been a small proportion of national health care costs compared to hospital and physician services, it has grown rapidly in recent years—comprising about 10% of national health care spending.

A multitude of reasons led to this steady rise in prescription drug costs, including the following.

Specialty medications account for a smaller portion of U.S. prescriptions than non-specialty drugs, yet they commanded nearly half of the pharmaceutical market in 2016 ($180 billion). And that dominance is likely to remain. Specialty drug spending is projected to experience rapid growth over the next several years, due to pricing increases.

Furthermore, approximately 66% of the drugs that gained Food and Drug Administration (FDA) approval in 2019 were specialty drugs, pointing to a steady rise in usage. This trend is likely to continue as more specialty drugs enter the market

Specialty drugs are not only commanding the pharmaceutical market, they are replacing lower-cost therapies. According to a Segal report, 40% of new products recently launched by drug manufacturers were specialty medications. These drugs are now being pushed at a higher rate than non-specialty drugs, contributing to price inflation.

Specialty drug utilization increased nearly 6% in 2020, whereas non-specialty drug usage remained relatively the same. And there is little recourse for anyone seeking a cheaper alternative to these specialty pharmaceuticals.

There are currently few biosimilar drugs (similar to the name brand drug’s composition, but not identical) that can be used in place of specialty medications—the FDA only approved two in the first half of 2020 and 10 in all of 2019. However, as more biosimilar drugs are approved, drug manufacturers are expected to introduce other countermeasures to maintain their market share and profits.

Reductions in drug utilization may mean that patients aren’t adhering to the drug treatments recommended by their doctors. A failure to fill prescriptions can have serious effects on patient health and lead to more costly medical problems down the road.

Below are just a few of the tactics that insurers, employers and consumers have implemented in an effort to curb rising prescription drug expenses.

Many health plans have responded to rising costs by creating drug formularies, which exclude certain drugs from coverage, and step therapy requirements, which require individuals to try more cost-effective treatments before “stepping up” to more costly drugs.

In addition, some insurance plans have increased patients’ out-of-pocket responsibilities by imposing separate prescription deductibles and requiring certain medications to have a prior authorization. Prior authorizations may be required when an insurer believes a less expensive drug may work just as well as the more expensive drug the doctor prescribed.

Using generic drugs is a well-known way to save money on prescriptions without sacrificing quality, but a lesser-known option may be using cash to buy prescriptions—instead of using insurance. No longer bound by gag clauses as of 2018, pharmacists can now tell an individual if they’ll save money by not using insurance and paying with cash instead.

Employers are not the only ones seeking to reduce costs when it comes to pharmaceuticals. As employees’ out-of-pocket responsibilities continue to grow, rather than paying for a brand name, more people are asking for cheaper or generic versions of drugs.

Consumers are also using the internet and phone apps such as GoodRx, Wellrx, and RxSaver to make price comparisons between local pharmacies and to locate available coupons. Some consumers are also looking to mail-order pharmacies to obtain 90-day supplies of their medications, which often offer lower drug prices.

The Centers for Medicare & Medicaid Services (CMS) projects that from 2012 to 2022, annual expenditures on prescription drugs will grow by 75% to $455 billion—other experts predict that figure could be even higher.

Furthermore, the CMS projects that from 2015 to 2024, prescription drug spending will grow, on average, 6.3% annually, which is slightly higher than its projections for health spending (which will increase at an average rate of 5.8% per year).

The CMS notes that during this time, new specialty drugs will enter the market and there will be fewer generic drugs launched. These projections are subject to change, particularly as they are affected by the COVID-19 pandemic.

While this blog post outlined several tactics for managing costs, one of the most effective ways is through diligent, line-by-line review of pharmacy contracts. We'll address the importance of in-depth contract reviews in an upcoming blog post dedicated to this topic.

For now though, employers should simply be cognizant of the enormous savings which can be recognized through a better understanding, and firmer negotiation, of such things as shared savings, formulary definitions, dispensing fees, rebate holdbacks and much more.