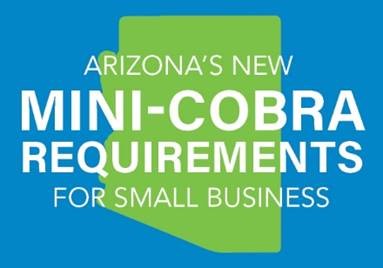 At the start of this calendar year, Arizona became the latest state to adopt a mini-COBRA law, which impacts small employers. The new law specifically applies to employer-sponsored medical plans issued or renewed on or after January 1, 2019. (Employers with plans that were issued or renewed prior to this date have a little more time to comply with the law.)

The law requires small employers – those that offer group health plans, including medical, dental and vision - to offer continuation coverage to eligible employees and qualified dependents who experience Qualifying Events that would typically result in a loss of coverage.

Employers impacted by this new legislation are those that have fewer than 20 employees for more than fifty percent of its typical business days during the prior calendar year.

Although the new mini-COBRA continuation coverage requirements are very similar to the Federal COBRA requirements that apply to larger employers, there are some key differences. We invite you to download our side-by-side comparison of COBRA and Arizona’s Mini-COBRA of how these requirements compare with one another.

Highlights Of The New Law

Here are some highlights of Arizona’s new mini-COBRA law:

Continuation coverage under Arizona’s mini-COBRA law may continue for up to 18 months and may extend for an additional 11 months when there is a disability. There are other circumstances under which coverage may be extended, details of which can be found in our side-by-side comparison of COBRA and Arizona’s Mini-COBRA.

Continuation coverage terminates when this allowable period ends, but will end sooner if the enrollee;

Mandated employers must issue a notice to eligible employees and/or their covered dependents within 30 days of a Qualifying Event informing them of:

A sample notice of coverage continuation can be found in our side-by-side comparison of COBRA and Arizona’s Mini-COBRA. Employers who use this notice in a timely manner will be deemed to be in compliance with the notice requirement.

A Word Of Caution About Company Size

A company that increases its workforce beyond twenty employees in one year may be subject to Federal COBRA the following year. Furthermore, companies that are related to each other through common ownership are treated as a single employer for COBRA purposes. In other words, while a company may have less than twenty employees, if it is related by common ownership to another company - and the combined number of employees exceeds twenty - both companies will be subject to COBRA rather than mini-COBRA.

While the current COBRA law includes significant penalties for failure to comply (up to $110 per day), non-compliance penalties aren’t specified in Arizona’s mini-COBRA law. Such penalties may eventually be added to the Arizona Administrative Code and it is possible that affected enrollees could bring legal claims against an employer for noncompliance.

Under the federal Consolidated Omnibus Budget Reconciliation Act of 1985—known as COBRA—many workers and their families have the right to choose to continue benefits provided by their group health insurance plans for limited periods of time under certain circumstances, including voluntary or involuntary job loss, reduction in hours worked, transition between jobs, death, divorce, and other life events. In the years since COBRA became law in 1985, many states have adopted what are commonly referred to as “mini-COBRA” laws.

To learn more about Arizona's new COBRA requirements, download our guide, which includes a side-by-side comparison of COBRA and Arizona’s Mini-COBRA as well as a sample policy notice you can begin using today. 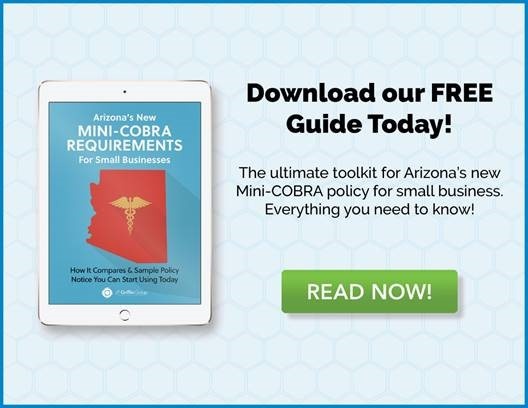 Are you struggling with COBRA related issues? Is your business affected by the new Arizona mini-COBRA law? Leave us a comment or contact us. We'd love to hear from you!