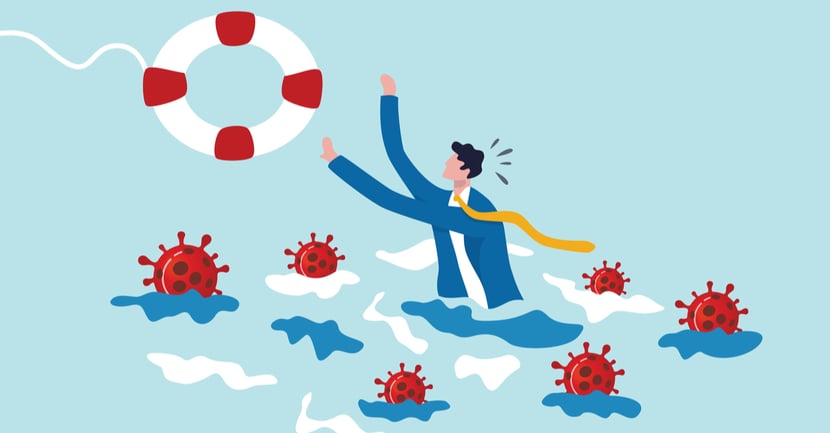 #1) ENHANCED UNEMPLOYMENT BENEFITS WILL CONTINUE BUT AT A REDUCED RATE

The CARES Act's enhanced unemployment insurance is set to expire at the end of July. Many employers found this initial relief somewhat problematic when it came time to bring employees back to work. The additional $600 per week on top of existing state benefits created a situation where many employees were suddenly earning more on unemployment than at their former jobs.

In an effort to prevent this issue from reoccurring, lawmakers are considering more targeted Federal subsidies in this next bill. This assistance would vary based on what's available at the state level. The new goal of the program is likely to be the replacement of 80 to 90 percent of a worker's former wages (vs. 100% in the former program), capped at a maximum Federal subsidy of $400 per week in incremental support.

There is also some discussion of adding a hiring bonus to this program. The Paycheck Recovery Act, proposed in mid-May, offers low-wage workers (those earning less than $40,100 annually), a $1,500 rehiring bonus upon returning to work.

#2) THE PPP WILL CONTINUE, BUT WITH MODIFICATIONS

Recently extended through August 8, the Paycheck Protection Program (PPP) will most likely continue but will become more targeted. On Friday, Treasury Secretary Steven Mnuchin expressed interest in "topping off" the $130 billion in remaining funds and extending the program.

Suggesting a "revenue test" of some sort, he added to his comments that the additional funds would need to be focused on certain industries such as travel, leisure, and dining, where actual losses from the pandemic can be substantiated.

Another proposal that has been gaining traction is something called the "P4", which stands for the "Prioritized Paycheck Protection Program Act". It proposes to not only extend the PPP but also to open it back up to firms that have already received PPP loans, providing they can demonstrate continued financial losses as a result of the pandemic.

Finally, support is growing for simplifying the PPP forgiveness process. While certain loans are now eligible for the EZ loan forgiveness application, there's shared interest among both parties in easing things even further for smaller businesses. One proposal on the table is to provide blanket forgiveness of PPP loans under $250,000.

#3) NEW TAX RELIEF WILL BE INCLUDED

While PPP funds already don't count as taxable income, an IRS ruling this Spring prevented businesses whose loans were forgiven from being able to deduct traditional business expenses paid for by PPP funds. The Senate introduced a bill in early May called the Small Business Expense Protection Act, which would allow some of these deductions.

The Senate's Phase 4 bill is also expected to improve access to the Employee Retention Tax Credit. As it stands now, companies that have tapped the PPP can't access the ERTC, which was enacted as part of the CARES Act to incentivize businesses hurt by the Covid-19 pandemic to retain employees.

#4) BUSINESSES ARE LIKELY TO BE GRANTED GREATER LIABILITY PROTECTIONS

With business owners and employers concerned that they may face a flood of lawsuits involving unsafe practices by customers and employees who contract the coronavirus, lawmakers are examining various proposals for liability protections to include in the next COVID-19 relief legislation.

In what is likely to be one of the more contentious issues to take up, the Senate is going to push hard for some sort of safe harbor for companies that make good-faith efforts to follow public-health guidelines when reopening for business.

While Senate Majority Leader Mitch McConnell has been stressing the need for blanket immunity, opponents worry that blanket immunity could leave employees unnecessarily exposed to the virus, particularly if the employer lacks the incentive to implement precautions such as increased cleaning and sanitization, wearing of face masks, or enforcement of social distancing.

Senator Lindsey Graham has proposed liability protections "where it makes sense, in a reasoned fashion" without "giving a pass to the bad actor." Some moderate Democrats have also expressed a willingness to consider liability protections providing businesses are provided with and follow, set guidelines aimed at establishing mandatory protocols for workplace safety.
Senator (First Name) Cornyn's proposed legislation would allow businesses to choose which guidelines to implement, whether federal CDC or other federal, state, or local guidelines.

Any liability protections passed are expected to apply retroactively to 2019 and would remain effect through 2024.

Phase 4 relief funding will likely ensure that companies in low-income and rural areas, as well as minority-owned businesses (many of whom experienced difficulty accessing the PPP), don't get overlooked.

Designed to run through local institutions rather than banks, this program is seen as better suited to reach businesses that don't have pre-existing banking relationships. As written back in May, the U.S. Treasury would still operate the program.

#6) ANOTHER ROUND OF SMALLER STIMULUS CHECKS WILL BE SENT OUT

The HEROES Act passed by the House supports another round of stimulus checks, to compliment the ones that the CARES Act authorized in March for millions of taxpayers. The House bill calls for individuals earning under $75,000 to receive $1,200, while married couples with less than $150,000 in adjusted gross income would get $2,400. The bill also would provide an additional $1,200 for up to three dependents, regardless of age.

For more information on all things COVID-19 related,  we've assembled two comprehensive COVID-19 Download Resource Centers designed to help both employers and employees deal with this pandemic and the challenges facing all of us.